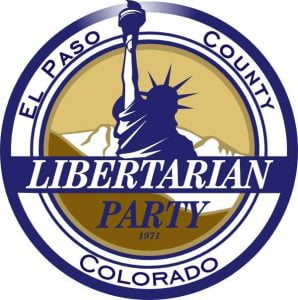 Article I.  Name and Address

The name of this organization is the Libertarian Party of El Paso County, or “LPEPC.” The LPEPC is a Political Party Committee under the Colorado Fair Campaign Practices Act, C.R.S. 1­45 et seq., duly registered with the Colorado Secretary of State Office.   The address of the LPEPC is:

The LPEPC is affiliated with and chartered by the Libertarian Party of Colorado, referred hereinafter as the “State Party.”

The purpose of the Party is to:

4.1.1.    A Regular Member is anyone registered with the El Paso County Clerk and Recorder as affiliated with the Libertarian Party but does not pay LPEPC dues.

4.1.2.    A Contributing Member is anyone registered with the El Paso County Clerk and Recorder as affiliated with the Libertarian Party and pays LPEPC dues.

4.2. All Members shall be residents of El Paso County.

4.3. All Members shall be entitled to receive LPEPC newsletters, be a Libertarian candidate, and vote at all Meetings and Conventions.

4.4. All Contributing Members shall also affirm of the Statement of Principles of the national Libertarian Party and disavow the initiation of force to achieve political or social goals.

Article V.  Board of Directors

5.1. The Board of Directors of the LPEPC, or “the Board,” shall be composed of the following Officers: Chair, Vice-Chair, Secretary, Treasurer, and the Chairs of the Standing Committees, for a total of no more than ten (10) Directors.  The Secretary and Treasurer positions may be combined out of personnel necessity as determined by the Board.  Other Officer positions shall not be combined, and other Directors may be combined but only count as one (1) position and one (1) vote. The Standing Committees shall be Bylaws, Campaign, Convention, Outreach, Education, and Media.

5.2.1.    Expenditure of funds or official action of the LPEPC may be undertaken by a resolution, at a scheduled Meeting or Convention, and passed by majority vote of attending Members; or

5.2.2.    Between Meetings and Conventions, expenditure of funds or official action of the LPEPC, between Meetings and Conventions, may be undertaken by a vote of the Board in person, by phone, email, or other means so long as a written or electronic record of the vote is made and collected by the Secretary and validated as accurate by a majority of the Board at the next meeting.  The votes shall be formally collected by the Secretary and saved for a period of one (1) year and made available to any Member upon request.

5.2.2.2. An email vote shall be conducted within a voting period not to exceed forty-eight (48) hours in duration, including all amendments.  At the end of the voting period, the votes shall be tallied as final.  A Director may change their vote within the voting period.

5.3.1.1. Officers and Directors are required to be Contributing Members for the duration of their terms.

5.3.1.2. Contributing Members who wish to run for office must either notify the Secretary in writing of their intention no less than 14 days prior to the Annual Convention at which the election will be held or bring documentation verifying eligibility.

5.3.2.    All terms of office of the Board expire at the close of the Annual Convention.

5.4. A Director may be removed from the Board by a resolution passed by a two-thirds (2/3) vote of the Board if:

5.5. A Director may resign at any time by giving written notice to the Secretary and the Chair.

5.6. A vacant Director position may be filled by an appointee approved by a majority of the sitting Board, using the Standard Balloting Process, to serve the remainder of the term.

5.7. All Directors shall be Members of the Libertarian Party for ninety (90) consecutive days immediately prior to election or appointment.

5.8. The Board shall annually appoint LPEPC representatives to the State Party Bylaws Committee and Platform Committee.  These appointments shall be made no later than four (4) months prior to the annual State Party Convention.

5.10.     Each Director shall keep a continuity file outlining the duties, processes, contacts, and other informational details of their position in order to facilitate operational continuity and consistency.

6.1. General Duties of Officers and Directors

6.1.1.    All Officers and Directors of the LPEPC shall carry out their duties in a libertarian manner with as much personal responsibility as possible.

6.1.2.    An Officer or Director may delegate their duties; however, such delegation shall be subject to oversight by the Board.

6.2.1.    The Chair shall take the leading role in determining the goals, direction, and plans for the LPEPC.

6.2.2.    The Chair shall ensure that the regular activities of the LPEPC are conducted in a timely and responsible manner that brings credit to the LPEPC.

6.2.3.    The Chair shall call and conduct all Board Meetings, Conventions, and special business meetings.

6.2.4.    The Chair shall act as a point of contact for interfacing to other Libertarian Party organizations, affiliates, and political campaigns, or other non­partisan political groups and organizations, not including the State Party.

6.2.5.    The Chair shall arrange for compliance with all State Party requirements, to maintain State Party affiliation.

6.2.7.    The Chair shall act as the LPEPC interface to the El Paso County Clerk and Recorder.

6.3.2.    The Vice-Chair shall assume the duties of the Chair in their absence or at such times as the Chair so designates, including the election of the Chair, as Acting Chair.

6.3.2.1 In case of permanent vacancy by the Chair, the Vice-Chair assumes duties as Acting Chair until a convention can be called where the new Chair will be elected.

6.4.1.    The Secretary shall prepare a written record of all Meetings and Conventions, which are to be made available to Members upon written request.

6.4.2.    The Secretary shall ensure that the regular activities of the LPEPC are announced and reported prior to the next scheduled meeting.

6.4.3.    The Secretary shall maintain and make available all official LPEPC records, including the state charter of the affiliate, the Bylaws, the Convention and Meeting Minutes, and contact information for the Board.

6.4.4.    The Secretary shall be the custodian for all written votes and ballots to secure their integrity and prevent tampering.

6.5.1.    The Treasurer shall keep accurate records of all expenditures and revenues.  Such records shall be both hard copy and digital.

6.5.2.    The Treasurer shall prepare and submit the Fair Campaign Practices Act Reports required by the State of Colorado.

7.1. Dues shall be assessed annually on calendar year basis, prorated.

7.2. Dues may be changed by passage of a resolution at a Convention by a two thirds (2/3) vote of Members.

7.3. If there is a change in the dues amount, the change shall take effect for each person upon renewal of membership or upon paying for a new membership.

7.4. Dues may be paid by one person on behalf of another, subject to applicable laws, or by any person for themselves.  The Treasurer shall record each payment accordingly.

7.5. Contributing Members shall be notified of upcoming Membership expiration no later than thirty (30) days before said expiration.  Such notification shall include the Membership type, dues amount, and expiration/anniversary date.

8.1.2.    Special Conventions may be called at any time by the Chair, or by a two-thirds (2/3) vote of the sitting Board, or upon written request of twelve (12) Contributing and/or Regular Members.

8.1.4.    Members shall be required to register their attendance and departure with the Secretary when attending any Convention.

8.1.5.    At all Conventions, a quorum shall be forty percent (40%) of all Members registered as attending the Convention.

8.2.2.    Special Meetings may be called at any time by the Chair, or by a two-thirds (2/3) vote of the sitting Board.  Special meetings shall be announced no later than seven (7) days in advance.

8.2.3.    Notice of each Meeting shall include the exact time and place of the Meeting, and in the case of a Special Meeting, its purposes.

8.2.4.    At all Meetings, a quorum shall be a majority of the sitting Board.  Attending ex officio board members may be counted in determining that a quorum is present.

9.1. The LPEPC may nominate Libertarian candidates for district or county-wide elected partisan public office, and urge the passage or rejection of ballot initiatives and referendums that will or may appear on ballots in a given election anywhere in the County, or ordinances or other measures that are subject to vote by any of the governments within El Paso County. Only Members residing within a specific district may vote on nominations of candidates, or endorsements of or opposition to ballot initiatives, ordinances, or other measures, for that district.

9.2. Nominations of Libertarian candidates for district or county-wide elected partisan public offices shall be made using the Standard Balloting Process by the Members at any Meeting or Convention.  Where applicable, district caucuses shall be used and may require coordination with other county affiliates, subject to the provisions of the State Party Bylaws.  Such nominations shall be made public by means of a press release arranged by the Chair or the Chair’s designee.

9.3. Endorsements of or oppositions to ballot initiatives, ordinances, Unaffiliated or non-partisan candidates, or other measures, will be made by majority vote of the Members at any Meeting or Convention.  Such positions may be made public by means of a press release arranged by the Chair or the Chair’s designee and identified as being solely an LPEPC endorsement or opposition.  Any ballot initiative or referendum may either be endorsed or opposed by a vote of the LPEPC Membership.  If neither endorsed nor opposed, the LPEPC will have “no opinion” on that particular initiative or referendum.

9.4 In the case of a recall election, the LPEPC may nominate candidates for the recalled office only if the candidate has been registered Libertarian for at least twenty-four (24) hours immediately prior to collecting petition signatures and registering as a candidate with the Secretary of State or County Clerk.

10.1.     The LPEPC shall not take any action that would result in an overdraft of the LPEPC bank account.

10.2.     The LPEPC shall not engage in the borrowing of money at interest.

10.3.     The LPEPC Members may donate money, items, or services for which the Board may vote to reimburse them at original face value at a later date.  Receipts for all reimbursed expenses must be submitted to the Treasurer.

10.4.     The LPEPC shall not take any action that is inconsistent with the Bylaws of the State Party or the national Libertarian Party.

10.5.     No other actions are expressly forbidden; however, responsible libertarianism is expected to guide all LPEPC actions and positions.

10.6. The Libertarian Party and its affiliates will never release personal information to anyone else without the informed consent of the affected individuals.

10.7. Access to the Libertarian Party of El Paso County’s contact management system is denied to any person who has not signed an appropriate non-disclosure agreement and provided such document to the Secretary for filing.

11.1.     These Bylaws may be amended at a Convention by a two-thirds (2/3) vote of the attending Members, provided that the amendment has been submitted in writing to the Board and published on the website no later than two (2) weeks prior to such Convention.

11.3.     Each proposed amendment shall be limited to a single topic.

The rules contained in “Simplified Rules of Order (Slightly Modified Martha’s Rules)”shall guide the LPEPC in all cases to which they are applicable and in which they are not inconsistent with these or the State Party Bylaws, any standing rules, and any special rules of order LPEPC or its Board may adopt.

13.2.     Other voting methods may be used if authorized by a two-thirds (2/3) vote of the Members at any Meeting or Convention.

13.3.     “None of the above” or “NOTA” is recognized as a legitimate candidate for every vote regarding elections, nominations, or appointments.  If NOTA should win the ballot, the balloting may be repeated with all previous candidates for that vote (except NOTA) being ineligible.  At no time shall NOTA be removed from a balloting.

Standing Rules  of the Libertarian Party of El Paso County

2.a. Technology to appear by phone or other electronic means is the personal responsibility of the person wishing to attend remotely.

Note: Standing Rules will, in future, be documented and numbered by the Policy Committee and approved by majority vote at a meeting of the Board.