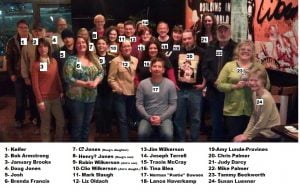 A call on Facebook, for El Paso county residents interested in forming a group, yielded several emails within minutes. An initial meeting was set for late-November, and we were on our way.
We discussed ideas on how to become a Development Group and the path to affiliation. Most of the original attendees are still active a year later.
Jan Brooks, pictured above, ran for Colorado Senate District 11 in the summer of 2013.